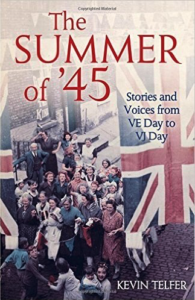 The Summer of ’45: Stories and Voices from VE Day to VJ Day

On 8 May 1945 British Prime Minister Winston Churchill finally announced to waiting crowds that the Allies had accepted the unconditional surrender of Nazi Germany and that the war in Europe was over. For the next two days, people around the world celebrated. But the “ slow outbreak of peace” that gradually dawned across the world in the summer of 1945 was fraught with difficulties and violence.

Beginning with the signing of the German surrender to the Western Allies in Reims on 7 May, The Summer of ’ 45 is a ‘people’s history’ which gathers voices from all levels of society and from all corners of the globe to explore four months that would dictate the order of the world for decades to come.

Quoting from generals, world statesmen, infantrymen, prisoners of war, journalists, civilians and neutral onlookers, this book presents the memories of the men and women who danced alongside Princesses Elizabeth and Margaret outside Buckingham Palace on the first night of peace; the reactions of the vanquished and those faced with rebuilding a shattered Europe; the often overlooked story of the ‘forgotten army’ still battling against the Japanese in the East; the election of Clement Attlee’s reforming Labour government; the beginnings of what would become the Iron Curtain; and testimony from the first victims of nuclear warfare in Hiroshima and Nagasaki. Combining archive sources and original interviews with living witnesses, The Summer of ’45 reveals the lingering trauma of the war and the new challenges brought by peacetime. 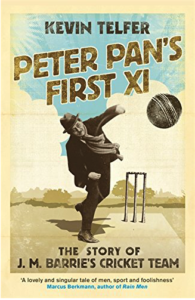 ‘Telfer’s book is a fine exposition of a little-known subject, one that manages to be more than just a cricketing chronicle, and that uses Barrie’s haphazard team as a prism through which to view the wider pre-war period.’ (Andrew Holgate, Sunday Times)

‘Telfer combines a mordant humour with an imaginative ambition to find in this celebration of cricket an allusive metaphor for a golden twilight of prelapsarian Edwardian England and the fall of a graceful innocence, when stumps were pulled for the last time, into the trenches and the immortality of Neverland’ (The Times)

‘We have an increasing need for Edwardian idylls in the 21st century, and Barrie’s idyll, which involved the creation of a cricket team who tried very hard indeed never to grow up, is lovingly recorded in Peter Pan’s First XI, by Kevin Telfer. The tragedy is that we all have to grow up, but at least we have cricket to keep the process at bay.’ (Simon Barnes, The Times)

‘Cricket is a literary game and there was no more literary team than the playwright J.M. Barrie’s team’

‘In this delightful book, Kevin Telfer tells the story of this lifelong love affair and its implications for Barrie and his charmed circle. The book attempts to capture an age and its attitudes and can be enjoyed by even those who do not have a penchant for England’s summer game.’ (The Telegraph, Calcutta)

‘This is a wonderful book, written with great elegance and affection, scrupulously researched and packed full of terrific stories.’ (Spectator)