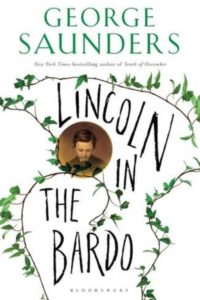 And this is why Lincoln in the Bardo is a classic novel in this Bahktinian sense. When I began reading Lincoln in the Bardo I found the way the words are laid out on the page confusing and disruptive as I was trying to read it. If you have not read it then let me explain. The book is structured in the form of a series of quotes (without quotation marks) with their attribution underneath. Some of them are only a line long. Other last for a couple of pages. For instance:

Presently we became aware, by way of certain familiar signs, that trouble was brewing.

It happened as it always happens

A hush fell across the premises.

At first, this felt like it disrupted the flow of the narrative until, after a little while, the device fades into the background and the different voices gel together to create a remarkable style of storytelling that completely eschews the idea of an individual narrator. It is a novel told completely in dialogue. I don’t think that this is a ‘difficult’ book – I found it very accessible and easy to read once I’d got past my initial unfamiliarity with the way it is laid out on the page.

The story itself is also remarkable: the reader inhabits the ‘bardo’ of the title – a transitional state in Tibetan buddhism between life and rebirth – and is introduced to a wide cast of the living dead who swirl through the story in a phantasmagoric whirlwind. Many of these spirits want to delay their journey to the next life because they feel that they have unfinished business in the lives that they are leaving.  These spirits include Abraham Lincoln’s son Willie, whose untimely death is the principal focus of the novel – but it is Hans Vollman, Roger Bevins III and The Reverend Everly Thomas who are the main narrators of the story. Other characters include the ‘disreputable Barons’, a sweary couple who provide plenty of humour:

No f—ing stopping. No f—ing thinking.

Remember that tine we lived in that f—ing beautiful field? With the kids? That, uh, spacious meadow?

In that tent? Remember that? After f—ing Donovan evicted us from the s—hole by the river? Those were the days, hah?

That was no f—ing spacious meadow! You piece of s—! That was where all the f—ing scum of the earth came to s— and drop their G—ed garbage!

But what a view, eh? Not many kids get that view. We could look out our tent-flap, and right there: the f—ing White House.

But first you had to walk around the G—n trash heap. While watching out for those big f—ing rats. And that gang of Hessian gropers that f—ing lived in there.

I have never read anything like it, and its mixture of pathos and bawdy humour was a complete joy – while its frank meditation on death and the things the characters wish they had done before they died made me think a lot about my own life and the things that I don’t want to be left undone.

I think it is a wonderful book and I recommend it to all of you.

27,889 Replies to “Lincoln in the Bardo – a very funny and brilliant novel”