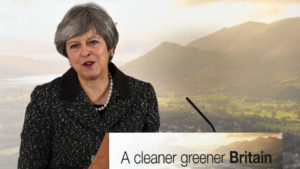 If anything – and if it’s possible – Jonathan Porritt is even more scathing: ‘I’ve now read this wretched 25-year Plan to Improve the Environment, and it’s impossible to feel anything other than the deepest contempt. Just take one of the headlines: ‘Zero unavoidable plastic waste by 2042.’ Nearly 25 years from now!  When May and Gove will be long gone, and probably dead. As will I.’

Both Porritt and Monbiot pinpoint what is so deeply problematic about this document – the fact that it diagnoses the disease in some detail, but does nothing to actually cure it. And when you realise that, then this document is even more shocking than if the government was claiming to be blissfully ignorant of what is happening.

So what is happening? The planet is experiencing it’s sixth  mass-extinction. Climate change is not only a problem of the future – it is a problem now. The oceans are choking in plastic and, in Britain, our cities are blighted by illegal air pollution that in London exceeded annual limits in the first month of 2018. I think it’s reasonable to say that it is nothing less than an environmental emergency.  But looking at the 25 year plan, there is no sense of urgency. The phrase ‘fiddling while Rome burns’ springs to mind. The only positive thing is that by the government indicating in this plan that it has a general understanding of some of the problems the environment faces, and some possible solutions that it seems reluctant to enforce, it is up to the people who care about the environment to highlight that gap between understanding and enforcement – between aspiration and policy – and between PR guff and reality.

It seems to have mainly rested with NGOs and media commentators to contest the government spin on this announcement – as with Brexit the Labour Party have been profoundly disappointing in offering a counter-narrative. And this is a far more important issue than Brexit, although it is also inextricably linked to it. Gove has talked about delivering a ‘green Brexit’ to counter the idea that the United Kingdom will become a deregulated cess-pit sitting off the shores of Europe, unencumbered by EU legislation – a laissez-faire tax haven for oligarchs, dirty industrialists and polluters. And it also ties into this Enid Blyton-esque vision of returning the UK to some mythical pastoral idyll where mass-immigration was just the pipe dream of a little boy called Tony.

Some of Gove’s rhetoric is actually rather appealing, as George Monbiot hinted. For instance:

‘In the 45 years since [poet Philip Larkin] wrote we have lost green space, cut down trees, sacrificed meadow and heath land, polluted our earth, air and water, we placed species in danger and we’ve run down the renewable resources – from fish to soil – on which our future depends. Farmland bird numbers have been cut in half, species have been devastated, bees and other pollinators threatened.

‘And at the same time, across the globe, we’ve seen climate change threaten both fragile natural habitats and developing human societies, we’ve allowed extractive and exploitative political systems to lay waste to natural resources and we’ve placed species of plants and animals in new and mortal danger while gambling with the future health of the whole world.

‘Now, I am an environmentalist first because I care about the fate of fellow animals, and I draw inspiration from nature and I believe that we need beauty in our lives as much as we need food and shelter. We can never be fully ourselves unless we recognise that we are shaped by forces, biological and evolutionary, that tie us to this earth that we share with others even as we dream of capturing the heavens.

‘But I am also an environmentalist because of hard calculation as well as the promptings of the heart. We need to maintain and enhance the natural world around us, or find ourselves facing disaster.’

The problem is that I don’t believe he really means it – or at least, there is very little hard evidence to suggest that he is willing or able (out of loyalty to the cult of deregulation? Because Tory party donors and supporters don’t want it?) to deliver the necessary policies that will address the serious environmental issues he appears to be so passionate about. In short, I doubt his integrity. I genuinely hope that I’m wrong.

Anyway, however much personalities are the engine room of political stories (in the same way that Frank Zappa called government the entertainment division of the military-industrial complex), this is not about Mr Gove – it is about protecting and enriching  the environment so that it may be possible to, in the government’s own words, hand over our planet to the next generation in a better condition than we inherited it. That admirable but distant ambition seems further away than ever right now. Those people that care enough need to fight hard for it.